Time to get adventurous and explore the parks and playgrounds in the East, which are not too far from the rare and premium Seaside Residences. Some of these are new or refurbished or just waiting to be discovered by you and your children Just a little heads-up, as some of the playgrounds may evoke feelings of nostalgia and childhood memories. Here are a few good ones where your kids can climb, jump, swing and slide to their hearts content!

This massive tower at the Marine Cove Playground is modeled after a lighthouse which has three different levels of slides.

The newly completed Marine Cove Playground is 3,500 square meters of pure fun for the young ones. The highlight of the new playground is the massive tower modeled after a lighthouse which incorporates three different levels of slides for kids to take on.

The Neo-Ring, an interactive game station, is purposefully designed and installed at waist-level to be wheelchair-friendly for children.

Besides the eight meter tower, the playground is designed to be family-friendly. It caters to children of diverse abilities and different ages. Its attractions include the Neo-Ring, an interactive game station, purposefully-designed and installed to be wheelchair-friendly for children, and the Cosy Cocoon, designed as a sanctuary for special needs, as well as two kiddie play areas for the younger tots.

While the kids are at play, parents may grab a bite at Coffee Bean or one of the other five eateries close by.

This generous-sized playground is located five minutes away from Siglap Shopping Centre at the intersection of Elite Park Avenue and Elite Terrace. It boasts one-of-a-kind playground structures for kids to swing and climb on.

A bright-coloured cheerful giraffe grabs your attention at the entrance of the playground. The highlights in this playground are the polygonal climbing rocks and giant netted swing which can take about three to five kids at one go.

An excavated portion of Fort Tanjong Katong at Katong Park.

The dog run area at Katong Park are what dogs dream of to run wild and free.

Katong Park, one of Singapore’s oldest parks, is located at the intersection where Meyer and Fort roads meet. In its heyday, the park bustled with activity as people enjoyed its facilities of a swimming bay and bandstand performances. In 1966, when the park lost its sea frontage to land reclamation works, it also lost its appeal to visitors.

However, the park is still worth a visit today for its rich history. Not many are aware that buried beneath the park is a British naval fort – Fort Tanjong Katong – which was built in 1879 by the British to protect the harbour. An excavated portion of the Fort sits at the eastern edge of the park waiting to be discovered by visitors. Katong Park also has a playground with a sand pit.

Besides the archaeological site, Katong Park also has a playground with a sand pit for the young ones as well as a dog run for furrier members of the family. 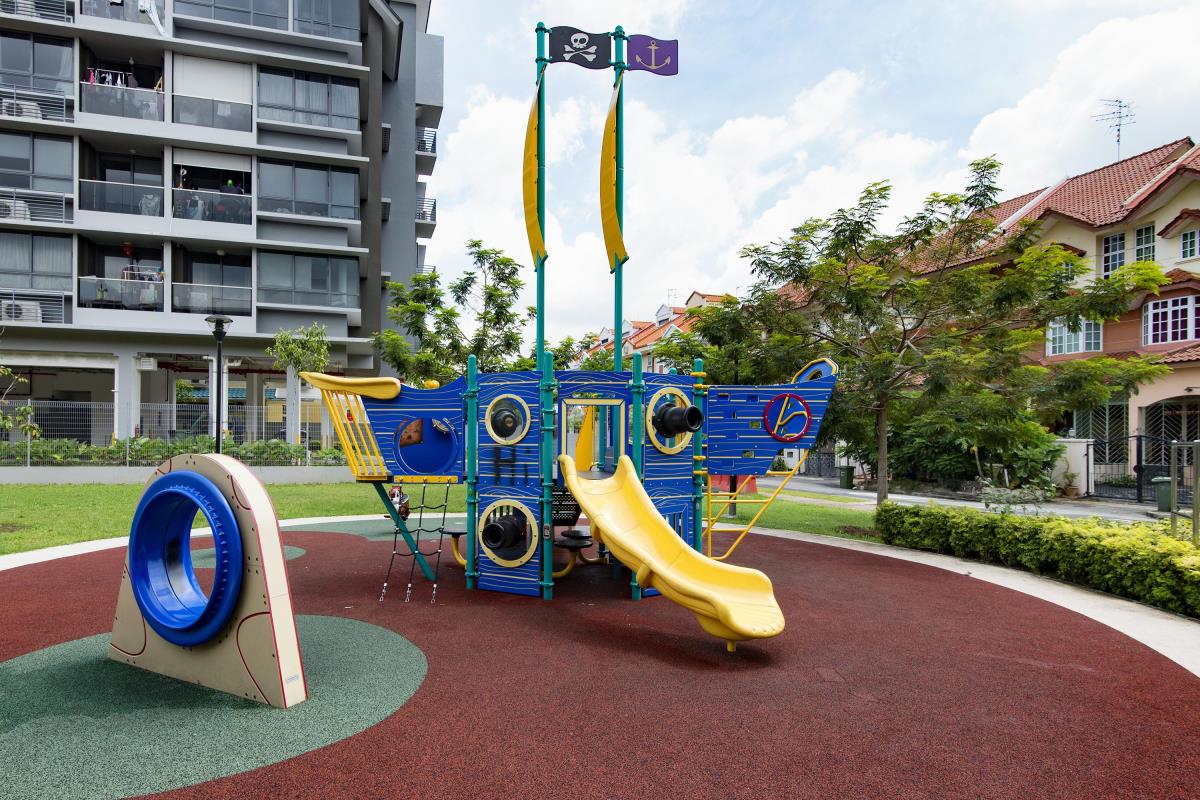 Make believe pirates may find their treasure in this ‘Ship’.

Ship Ahoy! Located at the intersection of Lorong Marican and Sims Avenue East, next to the elevated MRT Tracks between Eunos MRT and Kembangan MRT, is the delightful Pirate Ship Playground complete with the Jolly Roger’s flag on its mast. The ‘Ship’ comes with three cannons and has an upper deck as well as a lower deck for kids to explore and play at being Captain Jack Sparrow.

The Dove Playground in Dakota Crescent

The Dove Playground in Dakota Crescent, comes with a sandpit, like in days of old.

Situated within one of the oldest public housing estates in Singapore, the Dove Playground in Dakota Crescent was designed by Mr Khor Ean Ghee, who also designed the popular and iconic Dragon Playground in Toa Payoh.

One of the few playgrounds in Singapore that comes with a sandpit, the Dove Playground will be 38 years old this year. Yet, it is still able to offer the young ones an enjoyable experience with its two slides, a fireman’s pole and rubber tyre-styled swings.

Besides the playground, parents may also bring the whole family for a walk around the nostalgic old estate to reminisce what life was like in simpler times. Tucked in a cosy corner of Opera Estate, Bangsawan Park Playground is pretty standard as far as playgrounds go. Just behind the playground is a shophouse row comprising a few interesting eateries (Baker & Cook and Plank Sour Dough Pizzeria and Garang Grill).

Close by there is also the Opera Estate Interim Football Field, a free-to-play grass football field. Also do take the time to check out other charming playgrounds in the area such as the ones at Lucky Gardens and Sennett Avenue.